The Cartoonist as Care Bear 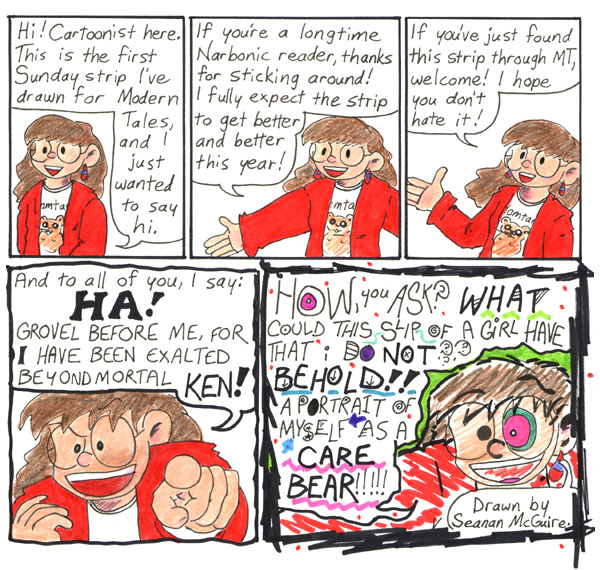 My coloring is always awful, but I still think this is pretty funny. I really was very excited to be drawn as a Care Bear.

In addition to drawing people as Care Bears, Seanan McGuire is a filker whose upcoming album, Red Roses and Dead Things, will feature a Narbonic song, “Oh, Helen.”

The Hamtaro t-shirt is one I got at work at some point. I used to wear that red cardigan all the time, too. 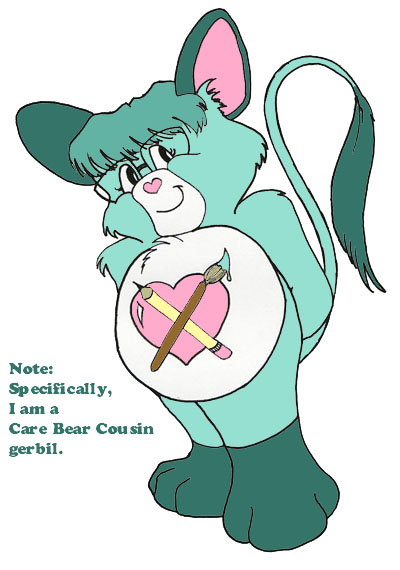 I think my favorite part is that it has glasses. 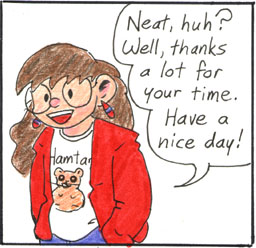 A few weeks ago, I talked Jeffery Wells into autographing my latest Narbonic book, (the one with him in it), and then bribed him with Skin Horse bookends to add something extra to the book. I just got the book back a few days ago and found the following written inside. I thought you might enjoy his.

Because I can’t sketch anything at all well, you get a bonus, bonus story! Think of it as a work sketch.

“It’s my most brilliant creation ever!!!” cried Helen B. Narbon. “An unearthly horror the world has never seen!”

“Hush, you,” said Helen. “I have brought both brilliance and evil into the world by ill-advisedly splicing together two normal animals and combining them into one godless monstrosity. The first is the African cheetah, the fastest animal on land!”

“What’s the other?” asked Dave.

The two managed to hold the silence for five whole seconds.

“Oh Dave,” giggled Helen in an unbalanced fashion, “you’re unexpectedly funny today.” With a flourish, she whipped a white cover off an object that had been sitting on the lab bench. “I keep him here in this little cage,” she said, opening the tine wee adorable latch. Inside was a gerbil, indistinguishable from the other roughly one thousand seven hundred gerbils Helen kept around the lab at all times.

“He is the fastest known gerbil,” Helen continued. “Additionally, I have spliced in a keen sense of wanderlust, because I felt like it.” She ushered the tiny creature out onto the lab bench, where it sniffed disinterestedly at an alfalfa pellet.

“Um,” said Dave. “Aren’t you worried that with incredible speed, and the desire to roam, he’s going to escape or something?”

“Nonsense,” said Helen. “I always keep him locked up in his little cage.”

“‘Always’ except for just now?”

“Exactly,” said Helen, going from sure to unsure in one word.

The two stared down at the lab bench for a moment, currently down one gerbil.

“Oh well,” said Helen, latching the empty cage. “You want to go out for evil nachos?”

THUS WAS A LEGEND BORN!!!

James was so inspired by this that he drew fanart of the fanfic based on his plush gerbil. At this point, things were getting a little weird.

Thanks, James and Jeffrey!

6 thoughts on “The Cartoonist as Care Bear”