Conclusion to “A Week of December 18 Story” 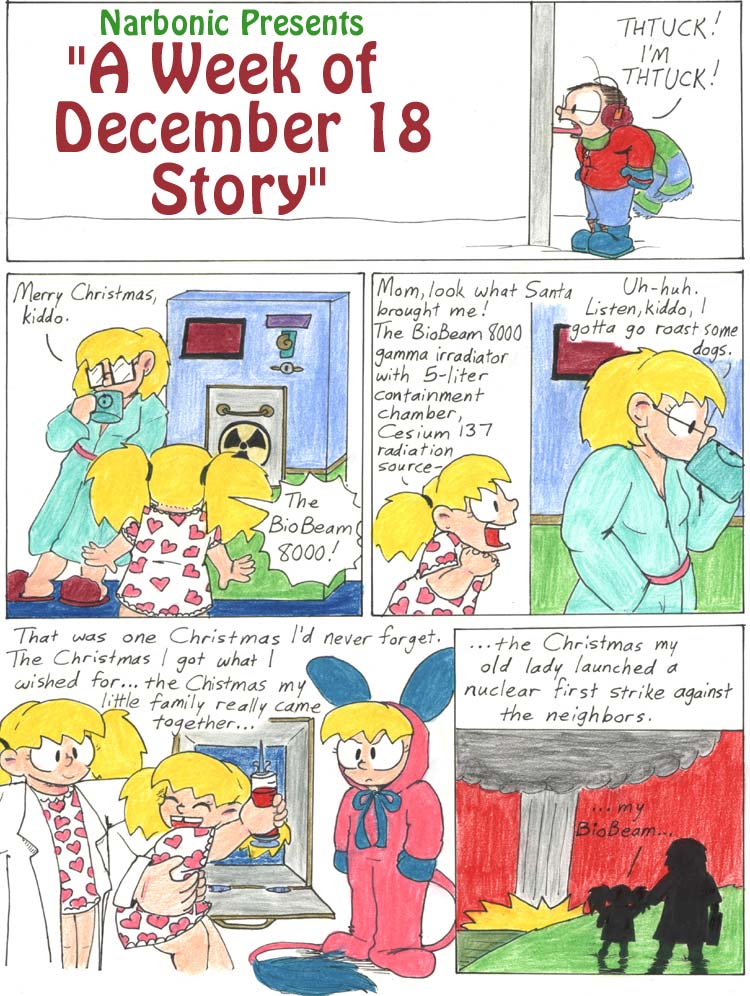 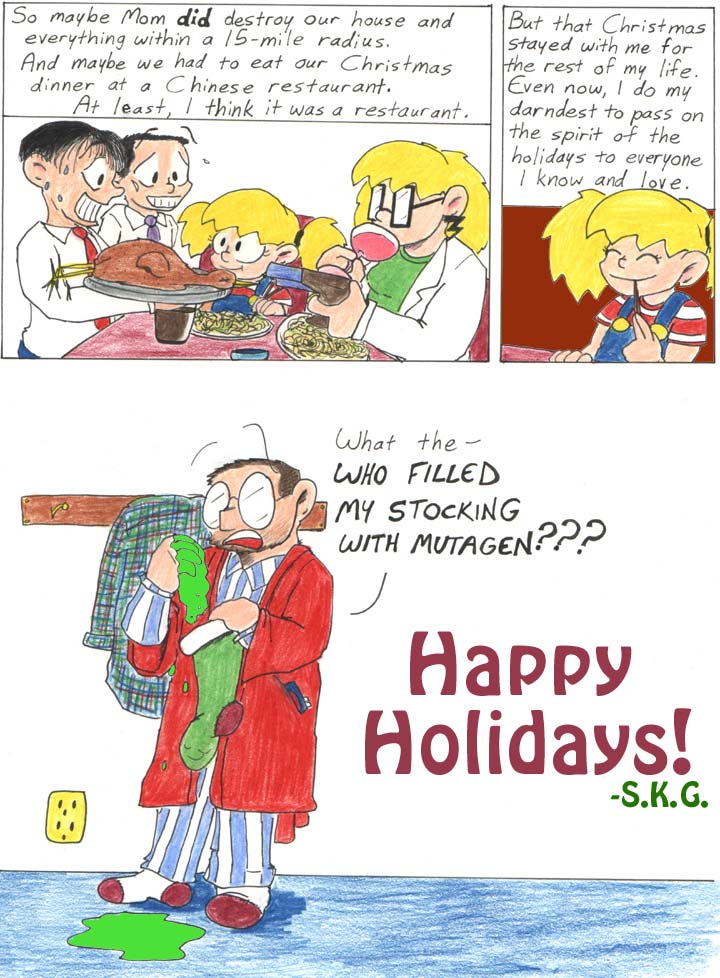 The scene in the Chinese restaurant in “A Christmas Story” always bugs me. Making fun of people’s hilarious accents is NOT COOL. On the other hand, nothing that pisses off Derek Kirk Kim can be 100% bad, right?

Thought I’d include some recent Narbonic extras this week. I have here a batch of photos from Ken Ambrose, who took James Rice’s staggeringly well-travelled gerbil, Speedy, to South America and Antarctica. Antarctica! Here are the photos, with Ken’s notes.

Image 1 – Leaving DC
Not wanting to spend the winter in DC, which is both wet and chilly, Speedy heads on a grand voyage to South America.

Image 2 – Ticket
After packing, he’s got his tickets for 36 hours of flights that will take him all the way to Ushuaia, Argentina – the southern-most city in the world. They compete with some little place in Chile, which is actually farther south, that is the southernmost Town in the world.

Image 3 – Passport
On Arriving in Argentina, Speedy presents one of his many passports. You might think that an intelligent, speaking gerbil might excite some attention, but he’s just waved through with a stamp.

Image 5 – Strange Fruit
On top of great vistas across the Beagle Channel, Speedy comes across these strange fruits. It turns out that they are from a tree fungus but that they can be made into alcohol.

Image 6 – I am not a Rat
Speedy is mistaken for a rat by B&B owner Alba. Google and the dictionary do not have the right words to help her understand that Speedy is an intelligent gerbil – quite clean and likely to take offense at the “R” word.

Image 7 – Chess master
Before heading off on the ship, Speedy takes time to defeat a local in Chess. Here he is standing on top of the battlements, ordering the death of the king.

Image 8 – With Laurie
After crossing the Drake passage in a Force 9-11 storm, where no pictures were allowed, Speedy meets with the expedition leader. In this meeting they discussed the likelihood of wildlife and interesting political connections that could be possible on the voyage.

Image 9 – Penguins1
Speedy observes the local wildlife, in this case Adaile penguins. These penguins nest on small rocks, which they will gladly steal from their neighbors. Speedy encourages all animals to find proper soft beds that don’t involve nesting in 1 degree Celsius with just rocks and snow under you, but is ignored.

Image 10 – Penquins2
Speedy tries to form a dialogue with the penguins but to no avail. The rookery is quite loud with penguins greeting each other after feeding at sea. It turns out that penguins can recognize each other’s voices, a good thing since they are all identical and you wouldn’t want to walk up to another male penguin and ask for a shag.

Image 11 – With Mayor
Speedy meets with the Mayor of Ensenada Base, an Argentinian station on the Antarctic Peninsula where a number of families live year round. While pretending to be dong valuable scientific research, this base is largely an attempt to maintain a claim on Antarctic territory. Speedy questions the mayor about getting a piece of the action, but is referred to Buenos Aires to meet with a political official.

Image 12 – Conference
Speedy ends the trip with a conference among other travelers. Unfortunately few of them have the same upbringing, a mad scientist’s lair is uncommon, and there is only so much to talk about. Thankfully they meet at the bar and are able to drown their differences.

Image 13 – Staff
Speedy thanks the local staff who served such fine food during the voyage and helped with the two passages across the Drake. This young woman was particularly generous with cups of tea and very politely called Speedy “Sir” throughout the voyage.

Image 13 – Captain
Speedy meets with the captain at the end of the voyage and thanks him. The trip so far has included a number of political contacts and a chance to see Antarctic beauty – a remarkable success. After seeing the incredible power of tabular icebergs, Speedy has some new ideas for ways to impact world events in the north. Shortly after this picture Speedy left the ship – the Sarpik Ittuk, and headed for Peru in order to visit ancient historical Incan sites.

7 thoughts on “Conclusion to “A Week of December 18 Story””