Yes, it’s guest strips this week! The above is by Drew Weing, who draws a daily autobiographical strip, The Journal Comic.

Aaand another guest week. As with the series of guest strips after Dave’s death, the idea was to give the impression of time passing before I cut back to the gang on the island. There’s another Zeta and Dana storyline coming up, too.

Anyway, at the time I posted this, Drew Weing was primarily known for his journal comic, but he’s now best known as the creator of the late, lamented infinite-canvas comic “Pup.” He’s currently working on a comic called “Set to Sea,” which I’ve been following on his LiveJournal. Also, you totally have to click on the link above, because the front page of his website is unbelievably awesome.

On another note, how much do I love that robot in the first panel?

This strip is by Dorothy Gambrell, creator of The New Adventures of Death and Cat and Girl.

The very idea that Dorothy Gambrell knows who I am makes me go all fangirly. I admire the hell out of Cat and Girl and her other comics. The New Adventures of Death was her comic on Modern Tales, now sadly no longer updating.

The top of Dave’s head is always a puzzle to draw. 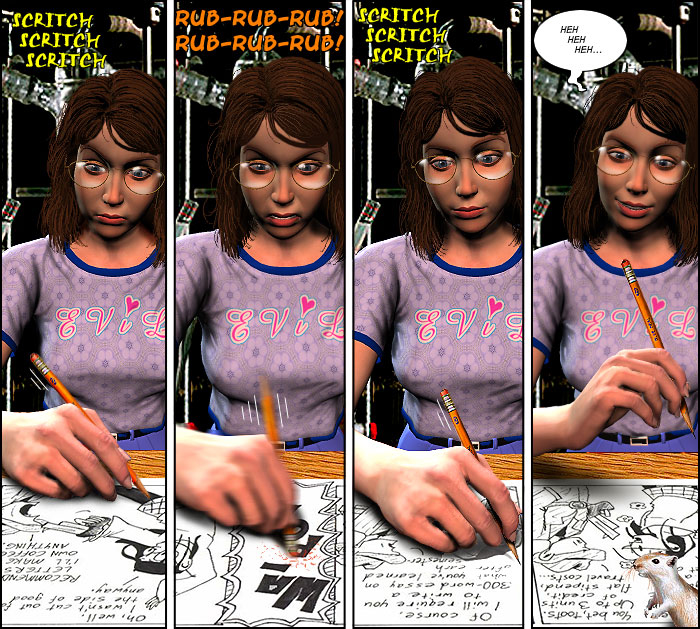 This strip is by Joe Zabel, who draws Return of the Green Skull. Yes, that’s me.

I’m really left-handed, but that’s okay. Joe Zabel is a great guy who drew comics for Harvey Pekar and was on Modern Tales for a long time. He did one of the panels in the last Narbonic strip, which made me very happy. I like the gerbil in the last panel here.

This one’s by Tom Hart, genius creator of Hutch Owen and other genius comics.

Tom Hart is a great cartoonist and student of comics. I’ve been a fan of his work since I was in high school, so it was awesome when we got to know each other through Modern Tales. We ended up collaborating on a comic, Trunktown, which we did for about a year. Now he teaches cartooning and inspires new generations of nerds like me.

Don’t you wish “Apartment 3-G” actually used that kind of language? How much more fun would that make The Comics Curmudgeon?

This strip is by Chris Shadoian, who draws Streets of Northampton.

This strip is both adorable and deeply creepy, which is probably what you want out of a Narbonic strip. I like the many varieties of concerned expressions on Dave’s face. Also note the Kirby krackle coming out of Helen’s test tube.

Chris Shadoian is a great guy who ended up doing a lot of stuff for me, including the bonus story in Narbonic Volume 2 and a panel in the final Narbonic strip. He was on Modern Tales at launch, drawing a collection of short comics called Streets of Northampton. Later, he drew Popcorn Picnic, which was about movies. He’s got a successful career doing stuff for the Disney magazines now, but I’d love to see more comics from him. His art is super cute.

This strip is by Jason Thompson, stunning cartoonist and editor of SHONEN JUMP magazine.

Jason Thompson is one of my best friends, and I was always very happy whenever he drew stuff for Narbonic. This strip reflects our shared irritation with unscientific depictions of “de-evolution” in science fiction, like the time it happened to the crew of “Star Trek: The Next Generation.” Sure, it was awesome that Barclay turned into a giant spider, but what was the cost to science? I will allow the Jonathan Coulton song “De-Evolving,” but only because it’s a great song.

Honestly, though, my favorite part of this strip is that in the first panel Helen and Dave are shooting each other with squirt guns for no reason.